Ulu Muda is the last great piece of rainforest in the northern state of Kedah, Peninsular Malaysia, located in the north eastern side and straddling the Thai border. This important forest reserve which spans 120,000 hectares, serves as a water catchment area for a major part of Kedah. Three great lakes are located in Ulu Muda – Tasik Pedu, Tasik Muda and Tasik Beris. Despite its immense natural beauty, it is still relatively unknown – many wildlife species are believed to lie undiscovered. Also, being so close to Souther Thailand translates to an environment with slight features of dry monsoon forests found up north of Southeast Asia.

The mix of lowland and hill dipterocarp forest in the reserve protect a large array of flora and fauna. Bird watchers will appreciate this area as hornbills and raptors are a common sight along the fringes of the lakes. Ulu Muda also teems with mammals, especially elephants which flock to the many salt licks in the area. Approaching the inner reaches of Ulu Muda Ulu Muda Forest Most visitors will spend their time at Pedu Lake (Tasik Pedu), which is the most developed part of Ulu Muda with with a recreational forest, proper tourist facilities and accommodation. This picturesque lake is the largest in the forest reserve and most accessible. To access the inner reaches of Ulu Muda, visitors need to take a boat from the Gubir jetty at Tasik Muda or follow the old logging trail with 4WD vehicles from Gulau. The boat ride takes an hour or more, depending on how far you any of the many river tributaries in Ulu Muda. 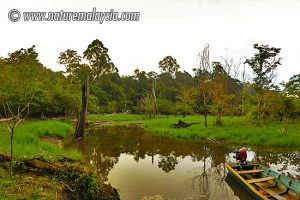